After a bit of user testing I have discovered that clicking the rename field without typing anything renames the file to ""; this causes an invalid path when it comes to saving the asset so I have implemented a Dialouge window when the asset is renamed in this way which also prevents the save from being executed. Users found this a bit easier to use as it allowed them to not do it accidentally and allowed the workflow to be polished,

I implemented a system for adding the custom material clone to the crystals using List<T> which uses a forloop to add the material to all of the crystals which had been instantiated. Funnily enough, I was not aware that lists are not automatically cleared which led to 208 meshes being stored and Unity to almost crash - after finding this error, I simply added a ClearList function before the objects are instantiated and it now works. 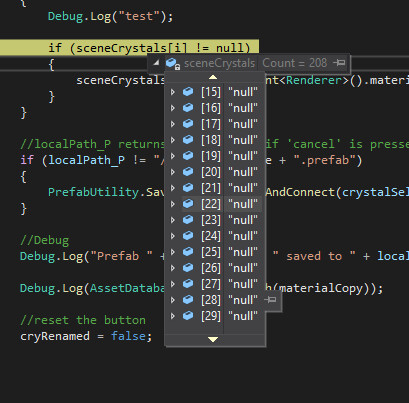 One issue I seem to be facing now is forcing the custom material clone to look the same as the normal one - for some reason the material is resetting to default when it is being cloned and I am unsure why especially when it seems to have the correct parameter clone values when they are exposed. It seems it will be a lot of trial and error to fix this.